It all started with information meetings, the so-called "Frauen Höcks" (women's meetings) on site in all regions of Switzerland. It soon became apparent that a real need had been addressed. The number of interested women almost doubled compared to the originally planned two sailing camps (Monday to Friday, for 22 women each). Overwhelmed by the rush, it was decided to do everything possible to enable all women to take part in the sailing camps without compromising on the high-quality program. The costs for this also increased and exceeded our original budget, as we had to organize more coaches, sailing boats, inflatable boats, transport of people, etc. The logistical and administrative effort also increased. The logistical and administrative effort also increased considerably.

There were 75 participants in two camps in Tenero who were accompanied and supported by a total of 11 dedicated helpers and coaches. The success was resounding. All participants went home encouraged and motivated, and most of them activated additional women in their clubs to train regularly on the water to be able to take part in the women's league that will start next year. The preparatory event and the races in Kreuzlingen were already very impressive in terms of the number of teams registered and the level of sailing.

The head coaches, Federica Salvà from Italy and Silke Basedow from Germany, proved to be professionals who were able to optimally channel the very different experiences of the participants in racing. They were also assisted by top coaches (Gaelle Cevey and Nelson Mettraux).
It is also worth noting that there was also a training session for Umpires and Race Officers Cadets, with 6 women taking part to support the Swiss Sailing League execute the numerous sailing events.

The sailing camp in Davos, which was led by Chris Rast, was followed by 15 enthusiastic participants in August of this year, some of whom were already convinced repeat offenders from the spring camp in Tenero. On the last day of the camp, which was unfortunately very rainy, Chris Rast and his co-trainer Nathalie Birt gave an interview that reflects the spirit and focus of the camps well.

Maja: Hi Chris, you have been leading the sailing camp in Davos for the whole week now what was the essence of the training with the women for you?

Chris: It's often about understanding the mechanics at the beginning. You are overwhelmed with all these maneuvers and can't see the wood for the trees. There are so many different maneuvers to learn, as a basis you know how to tack, how to jibe, how to set the gennaker and take it down again. Once you've practiced that, the forest clears and everything becomes easier. These basic maneuvers have been practiced and now need to be further practiced and internalized in the clubs. We also practiced the whole process of the regatta, what they must pay special attention to, where they have to priorities.

Maja: What do you wish for next year?
Chris: Less rain...no, that doesn't matter. Everything went well here in Davos, Markus (Bläsi) did a great job with the organization and logistics. Jonny from the sailing school in Davos also lent a hand, everything was great. It was difficult to estimate how much theory and how much practice we would do. We could only stay on the water for so long, until our concentration went down the drain, then it was no use anymore, you always must weigh it up a bit. But I wish we could get many more young female sailors to come to the camps. We have two young female sailors, otherwise they are women who perhaps came to sailing a little later. We need to get the younger women interested in coming to these camps.

Maja: Do you think we should support the young women financially; do you think the costs are a reason why there are so few young participants?

Chris: That can be a natural reason. When we look at our audience, it is mainly women who can afford something like this. With the younger women, that is still the question. Would they rather go on holiday or do something else like that?

I asked Markus if there are any institutions and foundations that promote sports for women, where we could find some support for this.

That would be great, because on the one hand we wanted to organize a good sailing week here and invite everyone, we must start somewhere, which we have done, but on the other hand we also want to organize camps where we invite women who have a certain level, who can then really benefit from sailing with their teams in the top regattas. We are not there yet! So much groundwork is still necessary. On the one hand from us, but also on the other hand from the clubs, they have to get to work. It's a pity, it used to be more like that.

Maja: Do you think that the promotion of young people in the clubs must increase, and that of course many young sailors lose touch when they go to university and start their careers?

Chris: Yes, this phenomenon can be observed throughout Switzerland, but it is also due to the clubs. On our lake, Lake Thun, we have, for example, the Yacht Club Oberhofen and the Lake Thun Yacht Club, a relatively strong youth promotion with good male and female sailors who also have Olympic aspirations. Of course, this raises the whole level right from the start. The bar is raised and the young people who come to the club see that these sailors are fully motivated to become even better, and that is of course a huge advantage, which is why youth development is so extremely important. If the clubs don't have that, then the whole level eventually goes down. Unfortunately, many clubs don't see that, or don't understand that, or they don't find the appropriate people who can do this youth work, and a lot of commitment is needed.

Maja: Thank you Chis for this interview.

This interview was conducted on the last day of the Swiss Sailing League Association 5-day sailing camp in Davos. The weather was challengingly wet and chilly, yet all participants enjoyed the professional training and challenge with Chris.

Interview with Nathalie Birt, female Assistance Coach in the women’s camp in Davos 08/22

Nathalie: Hi, my Name is Nathalie Birt and I came as an Assistance Coach to Davos. Chris did with us a fantastic camp, the theory, the practical and all the insides Chris shared with us, has been such a wonderful opportunity for everyone. It didn't matter at what level they were, when they started, everyone did get something from it. So, I am looking forward for the next one.
Maja: What is your background in sailing?
Nathalie: I started sailing in Australia, probably 15 years ago, but I started on big boats and was going down to smaller boats and I am taking part in the SSLA races for 2 years on the J/70s, and I went to the first woman’s camp in Tenero. It was so great, that I wanted to be involved so I volunteered.
Another thing that is wonderful about this camp is, it is very immersive. Everyone is together and we are sharing ideas and learning from each other, and there is a great energy and enthusiasm, which I haven’t experienced anywhere else. And I think this is one of the big reasons, why I wanted to come back and be involved in another camp.
Maja: Thank you Nathalie.

Interviews were made by Maja Dorfer

Nathalie sailed two weeks after this event on Lake Sempach and won with her female team from YCC CERN Geneva, the competition in the ACT II of the Promotion League: Elia Bourrego Arnau, Nathalie Birt, Adelaide Davis and Kate Robertson. Congratulations! The success for the engagement and the SSLA woman’s camps is already clearly visible in the results and passion of our female sailors in the Swiss Sailing Clubs. 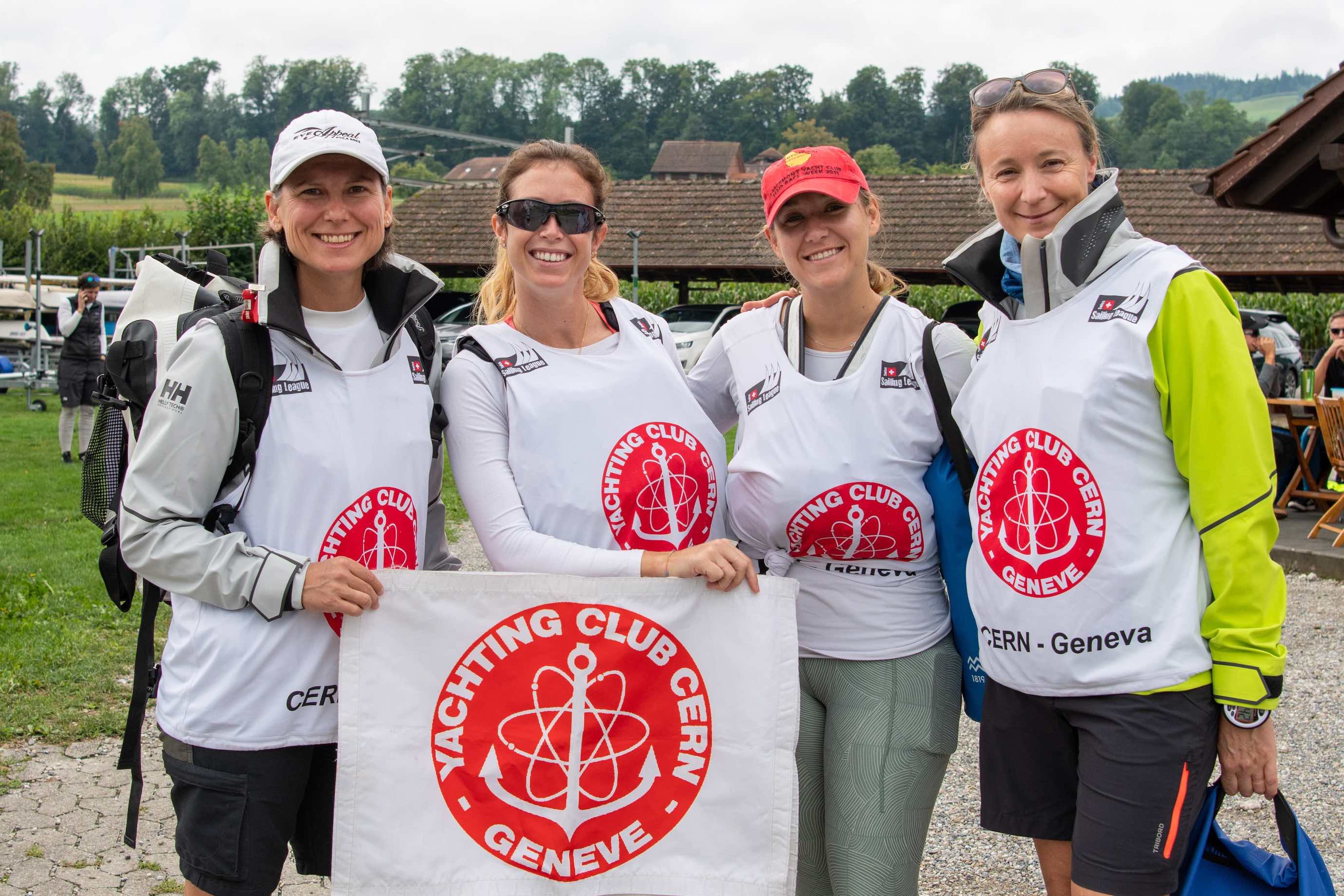 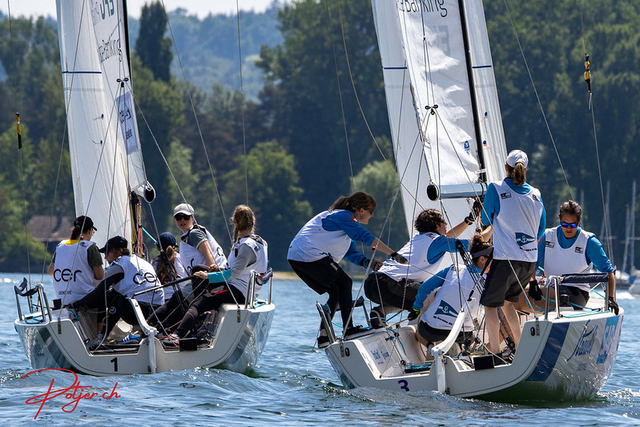 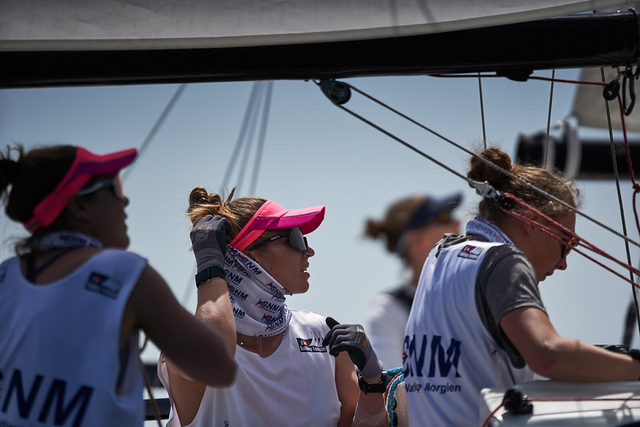 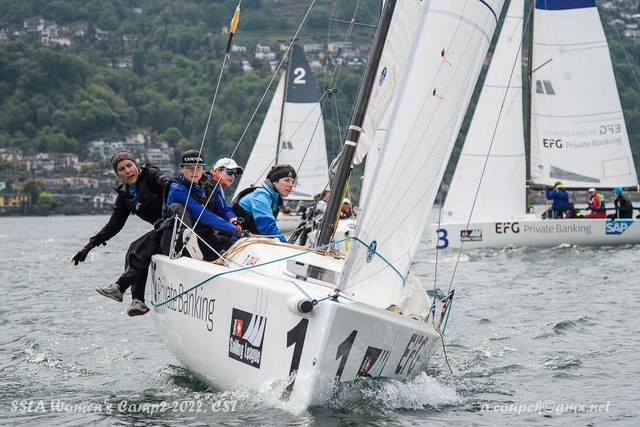 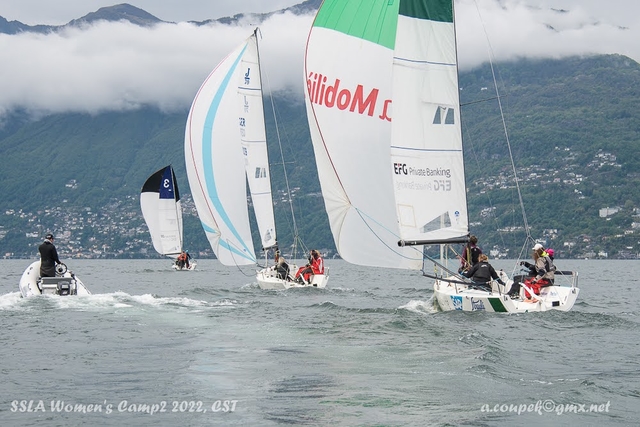 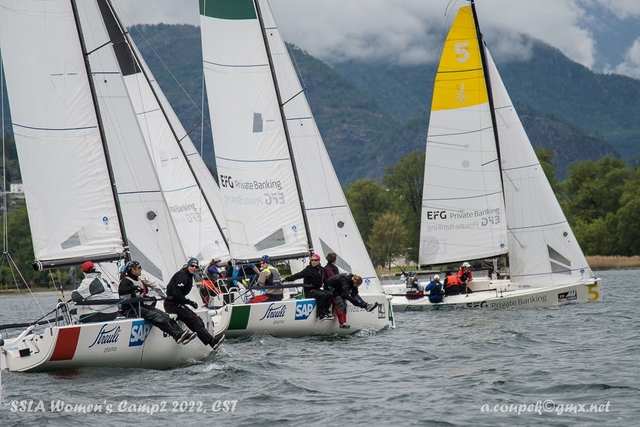 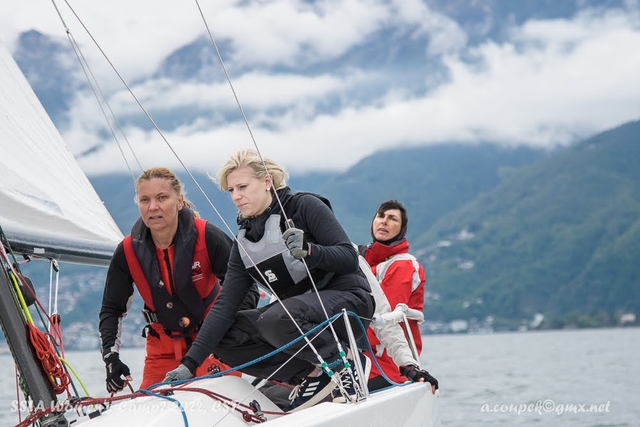 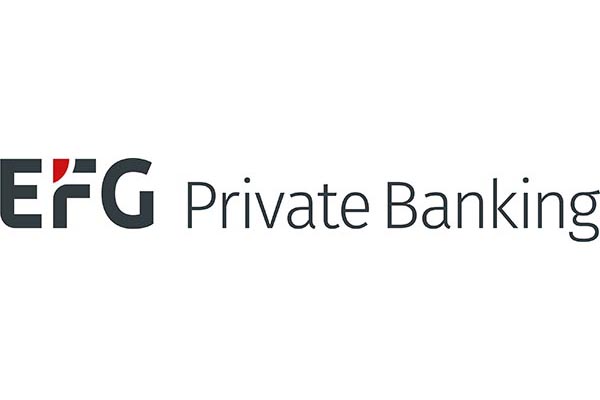 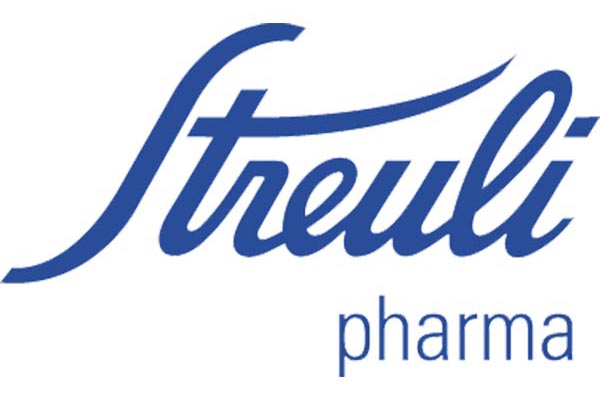 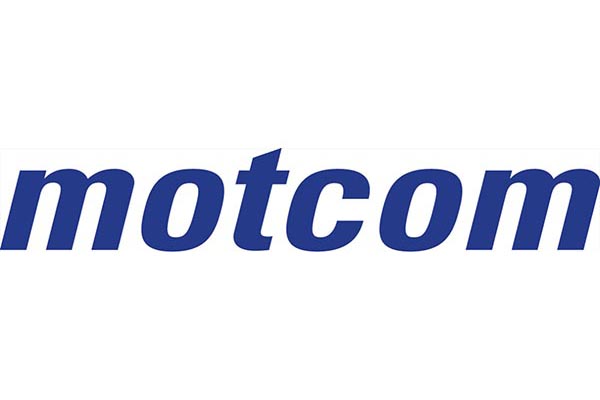 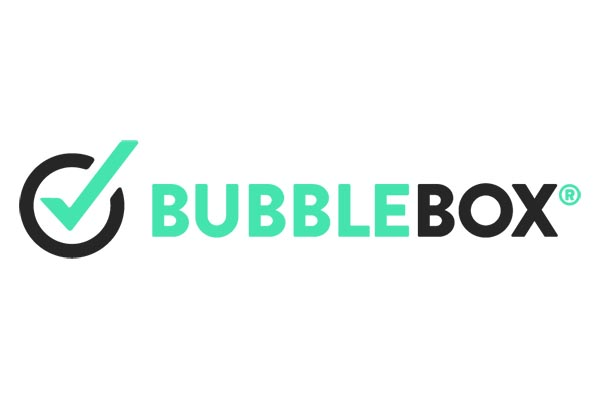